Why Global Brands Are Shifting Manufacturing To Southeast Asia 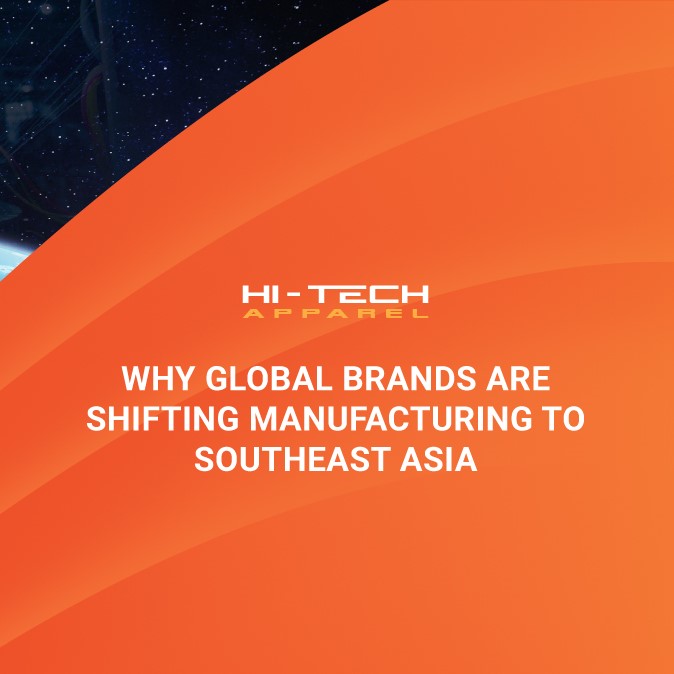 When Covid-19 began to spread in China, the mandated closure of factories and strict lockdowns drew manufacturing to almost a complete halt around the country. Even when goods could be produced, strict rules on international shipping often delayed their arrival at the intended destinations. The result has been a newfound focus on supply chain resilience, to allow for continued business activity in an unpredictable world.

While it is unlikely that outsourced manufacturing will leave China entirely, many companies are pursuing a ‘China Plus One’ strategy in order to remain competitive – focusing in particular on Southeast Asian countries like Vietnam, Thailand, and Malaysia to benefit from their advanced manufacturing capabilities.

The relocation of manufacturing from China to Southeast Asia can be attractive for several reasons.

Even prior to the pandemic, manufacturing in Southeast Asia was more cost-effective than in China. In 2019, wages for mid-tech workers in Thailand and Malaysia were up to 60% lower than for workers in China. The cost of manufacturing in China has steadily increased in recent months, partially due to a surge in commodity prices. In April 2021, the price of raw materials rose by more than 15% from a year earlier, contributing to the overall PPI of goods made in China.

Furthermore, the US-China trade war – which began in 2018, and continues to this day – has resulted in high tariffs as well as sanctions impeding the normal flow of goods between the two countries. The costs of this trade war are borne not only by international companies with factories in China, but also by local Chinese manufacturers. Some Chinese firms, such as electronics producer TCL Technology, have already moved to Southeast Asia in order to escape the tariffs set by the US.

Southeast Asian countries are strategically located for international trade, with additional incentives resulting from a range of economic treaties and free trade agreements. In particular, ASEAN nations benefit from the Regional Comprehensive Economic Partnership (RCEP) – one of the largest trade blocs in history, whose international reach gives the region considerable economic advantages in the context of the US-China trade war.

Building the sustainable business environment of the future

Business incentives alone aren’t enough to establish any country as a viable manufacturing destination, however. Modern infrastructure and technology must also be well-developed to make a given location competitive.

To meet these requirements, Laos has nearly completed its newest high-speed railway line, linking its capital city Vientiane with China. For its part, Vietnam is undergoing a $58.7 billion project to build a high speed railway connecting Hanoi to Ho Chi Minh City. Thailand has made similar investments to serve its EEC, while also greatly expanding the area’s seaport and airport.

Manufacturers relocating to Southeast Asia stand to gain from government-supported advancement in industry technology. Malaysia, Singapore and Thailand are among the top 50 destinations in the world for innovation on the Bloomberg Innovation Index. Recent high-tech advancements in the region include smart factories, robotics and automated manufacturing, cloud computing, and the recent introduction of 5G technologies – all available at competitive costs.

Though China remains an important manufacturing hub, Southeast Asia has quietly built itself up as a dream destination for companies looking to strengthen their supply chains. As a leader in international garment manufacturing, Hi-Tech takes full advantage of its presence in Southeast Asia to produce world-class apparel.

To learn more about Hi-Tech’s growing capabilities in Thailand, Cambodia, Vietnam and Laos, contact us today.

Why Global Brands Are Shifting Manufacturing To Southeast Asia

How Garment Manufacturing Partners Can Help Their Customers Innovate

Read the latest from our blog
END_OF_DOCUMENT_TOKEN_TO_BE_REPLACED
July 07, 2021

How Garment Manufacturing Partners Can Help Their Customers Innovate

Read the latest from our blog
END_OF_DOCUMENT_TOKEN_TO_BE_REPLACED
July 05, 2021

Read the latest from our blog
END_OF_DOCUMENT_TOKEN_TO_BE_REPLACED